FROM GLUTTON TO GOURMAND IN TWO EASY STEPS…

1. Glutton.
The nice thing about living in France is that foodie pleasure can be found in many forms.
Take election time. Elections in a small village such as ours consists of being given just one list of the mayor and his team that you are going to vote for. So either you vote for them all and the vote is counted, or you don’t vote at all. Apparently, you can cross someone off the team that you really don’t like, but I’m not sure if that was just advice from a local with a vendetta!
So off we trot with our one piece of paper in its envelope, stand behind the screen and pretend to do something (I was humming your standard strip-tease music, but no-one laughed), before posting it in the box, and a few weeks later it is time for the village celebrations to honour the Mayor and his team, the conseilleurs.
Because this was happening around the same time as la fête de la victoire, the ritual began with a victory day observance. WWII Victory Day is a holiday to celebrate the end of World War II (when Charles de Gaulle announced the end of World War II in France on May 8, 1945.) and thus Frances freedom. They remember those who died during the war. Interestingly, no one died for their country from this village in WWII (so they read out the names of WWI fallen instead) as the actual war for the French was very short before they were occupied. But this is a muddy subject as this doesn’t take into account people sent to work elsewhere in Europe, the resistance, deportation…
Anyway, on to the new Mayor’s speech (except he forgot to put his tri-colour sash on to be all mayor-like) and the serious business of eating and drinking. Here is the Glutton and the pleasure bit. The new conseilleurs had gone all out to welcome the community. A lovely spring evening, lots of fabulous ancient faces from the older residents of the village, and a good sprinkling of young kids running around too. Not only did we have those favourites of mine, crisps and cola (see post 14/04) there were Quich-y bits and pate-on-bread bits and lashings of cheap rosé, of which I drank far too much… so it was very easy and a totally enjoyable evening to boot to be a Glutton. 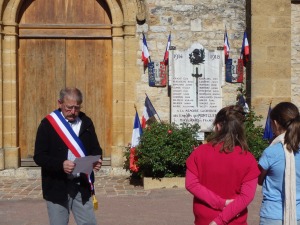